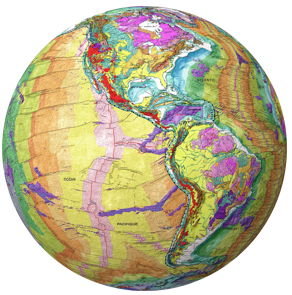 FRESNO, Calif., December 14, 2015 – Real World Globes has partnered with France-based Commission for the Geological Map of the World (CGMW) to create the world’s most comprehensive globe depicting the Earth’s geological features. The three-dimensional design of the Geological Globe of the World is intended to help teachers, scientists and map enthusiasts engage and learn interactively. Real World Globes will unveil its new product at the American Geophysical Union Fall Meeting in San Francisco Dec. 14-18.

“Unlike a lot of globes, ours are meant to be handled and marked up,” said Jeff Liedtke co-founder of Real World Globes. Featuring a durable dry-erase vinyl surface, the globes “create a unique and engaging experience to foster discussion, interaction and more active classroom instruction,” he added.

The Geological Globe of the World is based on the third edition of the Geological Map of the World, published in 2014 by the CGMW. It integrates state-of-the-art geological knowledge about the planet Earth based on the collaboration of hundreds of countries, national and international scientific and academic organizations. To create the maps, the CGMW has compiled and synthesized local and regional geology maps from around the world. “We are thrilled to see the latest global geological information displayed in such dramatic fashion,” said Dr. Philippe Bouysse, scientific advisor to the CGMW and the map’s main author. “The 3D presentation creates quite an impact, and fosters interest in and learning about the Earth’s dynamic geology,” he added.

Bouysse is a marine geologist, a retired official of the French Geological Survey and former secretary general of the CGMW. Real World Globes converts the CGMW’s maps for use on a three-dimensional spherical globe. The production results in the world’s most accurate and realistic representation of geologic information to date, bringing to life such features as plates comprising the Earth’s crust, continents and shelves, ocean basins, subduction zones and trenches, ridges and spreading zones, seamounts and hot spots, fracture zones and fault lines, and age of continental and oceanic crust.

Offering an integrated synoptic overview of the Earth’s most important geologic megastructures and formations, the Geological Globe of the World is an up-to-date reflection of the major continental shifts and global tectonics that have occurred on the Earth’s surface over the past 4 billion years. In contrast to two-dimensional maps, which inherently distort the size and shape of features, Real World Globes’ spherical maps minimize distortion while retaining true relative and absolute scale. “On our globes, Greenland is depicted the way it really exists – not half the size of North America, like it looks on 2D maps,” said Liedtke.

The Geological Globe of the World is offered in three sizes: Colossal (30-inch diameter), Large (18-inch diameter) and Small (10-inch diameter). The products are available as build-it-yourself kits, or fully assembled. They may be ordered online at realworldglobes.com. About Real World Globes Real World Globes makes products that are designed to facilitate fun and rewarding learning experiences by employing hands-on visual and spatial learning techniques. These techniques complement and augment typical classroom instruction and enable breakthroughs in understanding and learning.